7 months ago 6 min read
By using our website, you agree to the use of our cookies.
Learn more Got it!

Home > Self-education > Why Are Some Kids Thriving During Remote Learning?

Why Are Some Kids Thriving During Remote Learning?

Though remote learning has brought many challenges, some students seem to be thriving in the new circumstances. What can we learn from them?

All school year, Montenique Woodard’s seventh period, her last class of the day, has been her hardest. “I feel like I don’t know what to do with them,” she said of her middle school science class when Edutopia first talked to her back in the fall. One boy in particular, the “class clown,” was a persistent challenge, and his behavior influenced his 23 peers, 15 of whom are boys.

But reconnecting months later during the coronavirus closures, Woodard shared some surprising news: the same boy was “thriving” during remote learning. “I think not having those everyday distractions in school has really allowed for kids like him to focus on the work and not necessarily all the social things going on because some kids can’t separate that out,” said Woodard, who teaches in Washington, D.C.

We’ve been hearing that a lot. Increasingly, teachers in our audience are reporting that a handful of their students—shy kids, hyperactive kids, highly creative kids—are suddenly doing better with remote learning than they were doing in the physical classroom. “It’s been awesome to see some of my kids finally find their niche in education,” said Holli Ross, a first-year high school teacher in northern California, echoing the sentiments of dozens of teachers we’ve heard from.

That’s not to say it’s the norm. Many students are struggling to adapt to remote learning: Digital access and connectivity remain a pervasive equity issue; stay-at-home orders have magnified existing problems in familial dynamics; and, universally, teachers and students grapple with how to replicate the engagement and discourse from an in-person classroom.

But it’s not a tiny handful, either, and the unplanned break from the physical classroom may be bringing to light  hidden reasons some kids struggle while others succeed. In the responses we gathered from our educators, we found recurring themes—like social situations and the inflexible  bell schedule—that simply don’t work well for all kids. For a few of the teachers, at least, it’s inspired them to consider making permanent changes when they return to the classroom.

THE BENEFITS OF SELF-PACING

On average, the typical high school student starts school at 8:00 a.m. While school schedules differ by district, many students then face back-to-back classes with little reprieve. But during the pandemic, school schedules have suddenly become more fluid, allowing students more choice over when and how they do their school work.

“I think a few of mine are doing really well getting a taste of more independence,” said Lauren Huddleston, a middle school English teacher in Memphis, Tennessee. “They’re taking ownership a bit more because they’re no longer under the micromanagement of the school day.” 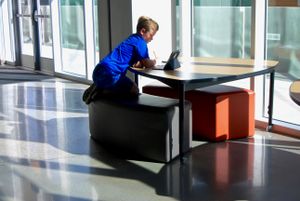 ©Nora Fleming
Teachers told us that many of their students like working at their own pace during school closures, an insight some say they’ll take back to their classrooms when they return.

This flexibility to make their own hours is also giving students a chance to exercise, take breaks, or even be bored, all of which research shows is beneficial. High school English teacher Ashlee Tripp speculated these kids were doing well because, “they enjoy the freedom to work at their own pace and decide how they want their day to look,” and students seem to agree.

“The reason I enjoy online learning is because of the opportunity to structure my day efficiently,” wrote a 10th grade student in English teacher Katie Burrows-Stone’s class survey. “I am able to workout, relax, and complete the work in a timely manner, with no distractions.”

TIME TO RETHINK THE OVEREXTENDED KID

During the school day, many students remain constantly on the go. Lunches are often filled with club meetings. After school, many participate in extracurriculars or sports—often to impress colleges—or work a part-time job. On average, high school students spend a minimum of seven and a half hours a week on homework at night.

After enrichment activities were canceled due to shelter-in-place orders, our teachers say they also saw a difference in some students’ performance.

“For my students, there are some that are thriving. I think it is partly because so many things like sports and social activities are no longer happening and they have more time than they ever had to work on school work,” said Kasey Short, a middle school English and social studies teacher in Charlotte, North Carolina, by way of explanation.

Research has found jam-packed schedules can be a significant challenge for a child to juggle: Students who are over-committed, especially if they feel obligated to take certain courses or participate in activities, are more likely to experience unhealthy anxiety levels.

“This has given me so much pause about what we are doing in education: Is our current model way too much? Why would anyone need to have seven classes? Why does the school day need to be so long?” said Rosie Reid, a high school English teacher and the 2019 California Teacher of the Year. “I can’t say enough about how this closure has changed my entire approach to teaching because I see how it has been an amazing respite for so many students.”

Other teachers point to the changing academic expectations during the pandemic as a causal link. Given the structure of home learning—and pervasive equity issues—many school systems have encouraged teachers to be more lenient with coursework and grading.

“I think a huge part of [some students’ work improving] is that we’ve dramatically ratcheted down the total workload in order to make tasks accessible rather than overwhelming,” said Mark Gardner, high school English teacher in Camas, Washington.

According to a Pew Research Center study, teens cite academic pressure as the top pressure they face, with 61 percent of teens reporting they feel the heat to achieve at a certain level academically. Teachers too, have also been under increasing scrutiny in the last decade-plus to prepare students to hit benchmarks on standardized testing, pressure that trickles down to students, who are twice as likely to report unhealthy levels of stress during the school year compared to the summer.

“One student told me he likes remote learning better because he no longer feels the extreme pressure of failing,” said Cathleen Beachboard, a middle school English teacher in Fauquier County, Virginia, who says other students in her class have expressed similar sentiments. “He says that now that the pressure of state testing is off, he feels he can really learn.”

Though we’ve seen many comments—from both students and teachers—about missing the in-person connections and relationships at school, for some students, school socialization may be fraught with anxiety, our teachers suggest.

“Students who have been victims of physical or verbal bullying while at school are likely to be relieved to be home in a safe space,” said Elena Spathis, high school Spanish teacher in Hillsdale, New Jersey.

According to the National Center for Education Statistics, in 2017, at least 20 percent of students ages 12-18 reported being bullied at school. Students who are the most bullied have also been found to have lower academic performance than their non-bullied peers.

For other students, socialization at school may not be negative per se, just distracting or intimidating. Nearly a third of teens have reported feeling pressure to “look good” or “fit in socially” at school, which can influence their participation and focus in class. “The online environment may allow for voices to be heard without the added bit of social anxiety,” said Blake Harvard, a psychology teacher in Madison, Alabama.

Lastly, teachers commented that the difference they’ve observed in some students’ performance may be tied, simply, to sleep. Like many teachers—and workers across the country—most students are no longer waking up to a very early alarm clock.

“I have the time to sleep eight hours a night every night [now],” said Ingrid, a high school junior in California, when asked what she likes about remote learning.

While the American Academy of Pediatrics recommends 8-10 hours a night for teens ages 12-18 and 12 hours for children ages 6-12, a 2018 study of high school students across 30 states found more than 70 percent of students were not getting enough sleep during the school year.

Though the long-standing debate over school start times never seems to end, when the Seattle school district delayed school start times by an hour at one school in 2016-2017, researchers found students’ sleep increased and grades improved.

“There are kids who have a hard time getting to class at 8:30, but they might do really well getting their work done at 10:30 at night or even 10:30 in the morning. They just need a couple extra hours,” said Ross.

Teach Current Events as ‘History in the Making’